Exploring the Waters with Saltwater Society

In Newfoundland and Labrador a boil-up is regular occurrence. From long weekend gatherings to evening dinners with family and friends, the people here have been fishing, gathering and feasting together around fires for centuries.

Exploring the waters, wildlife and landscape of Canada’s most easterly coast is what the Fish, Feast & Fire experience with Saltwater Society has mastered. This cod fishing tour followed by a traditional beach boil-up, prepared by an executive chef, will not only give you a real taste of our culture but also the bounty that our island has to offer. 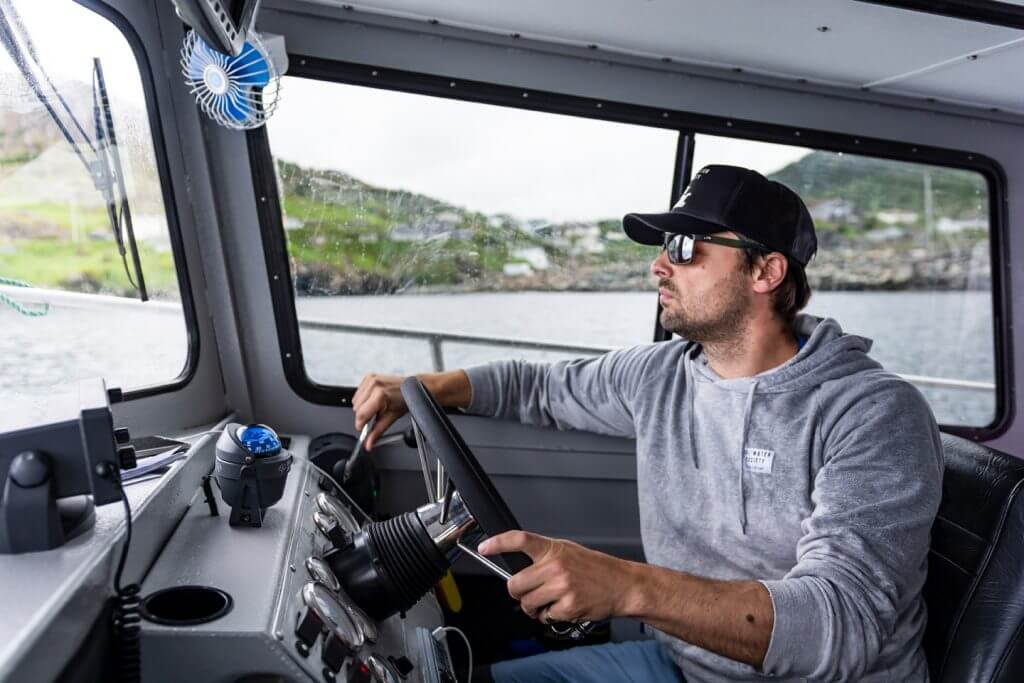 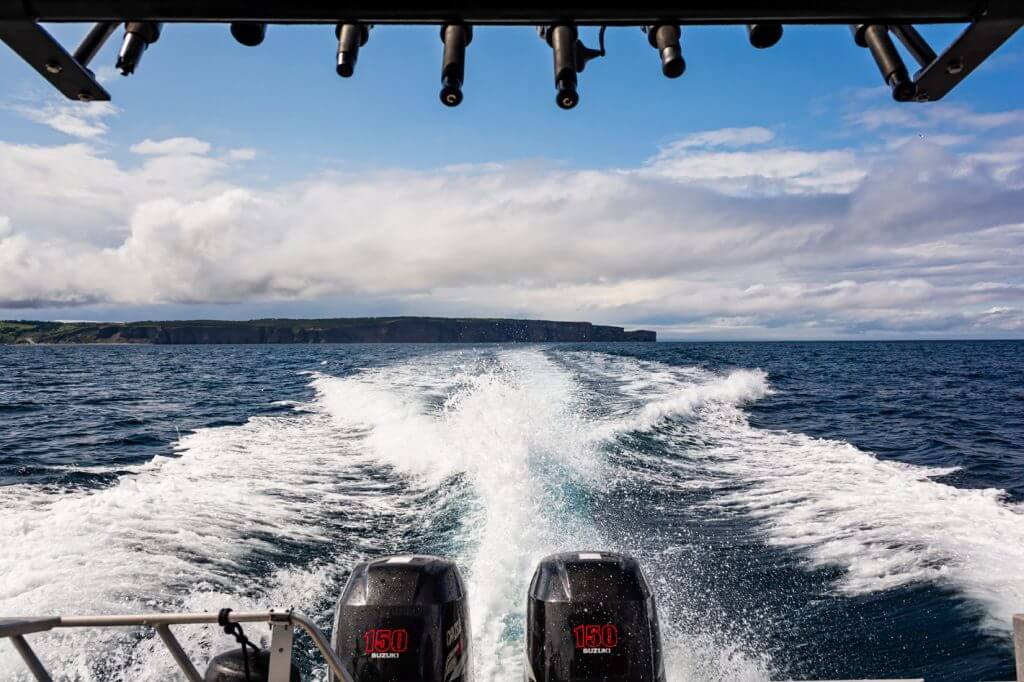 As you make the 30-minute drive from St. John’s to the harbour of Portugal Cove St. Phillips you will immediately be surrounded by wilderness. Evergreen forests and reservoirs flank the winding roadway to the dock where the fishing vessel awaits.

It is from this working harbour that the ferry to Bell Island also departs. Bell Island, also called “the ledge” serves as a backdrop throughout your fishing adventure. Home to the Bell Island Heritage Museum including tours of the Underground Iron Ore Mine it was also once one of the most prolific fishing grounds in the 1700’s. 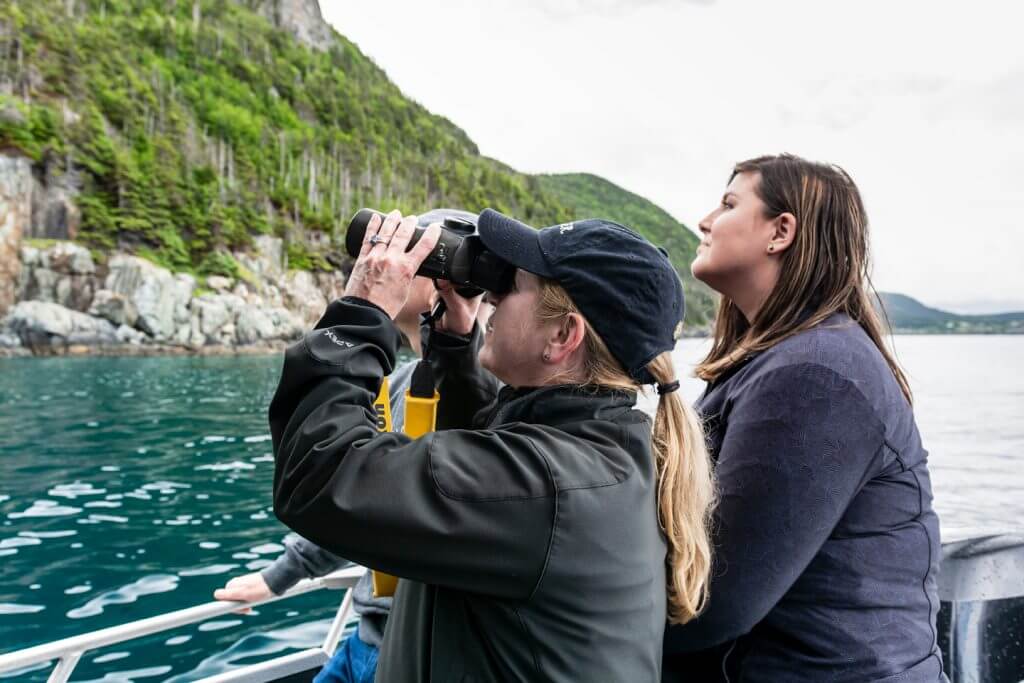 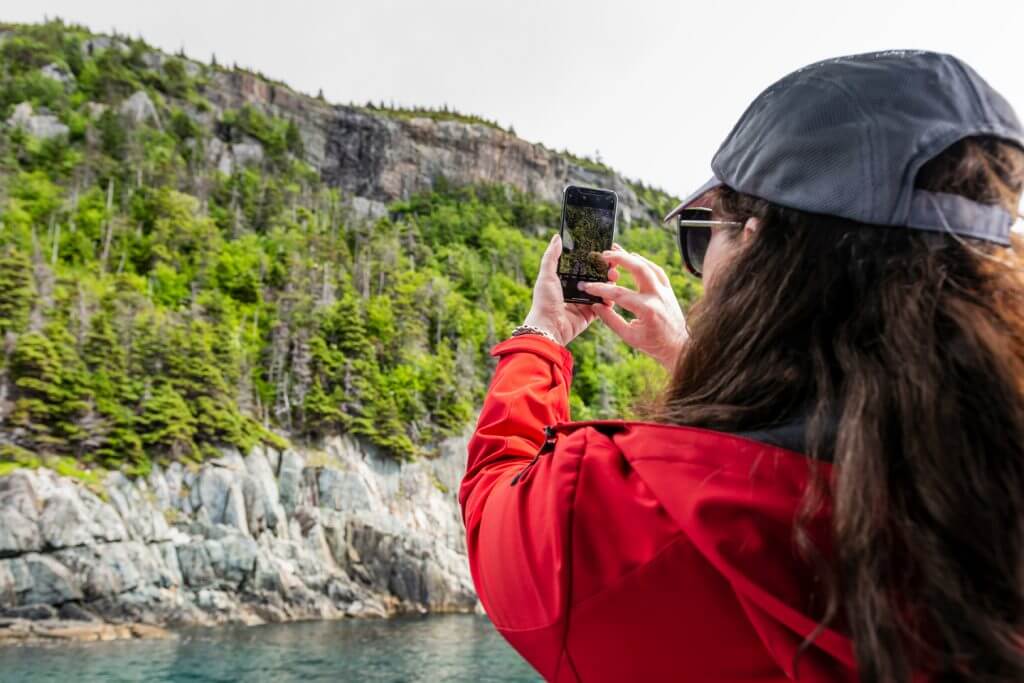 The boat will troll past hidden coves, waterfalls and the dense forest perched on the rock. It is here that you may even be able to spot the fishermen of the sky, Bald Eagles. A pair of binoculars and the trained eye of the captain will help you spy on the large nest nestled along the tree tops, where you may even see mom and dad coming in with the catch of the day. During this time you will hear all about the history of cod fishing in Newfoundland & Labrador and listen to the captain share a few yarns, just like any fisherman can. 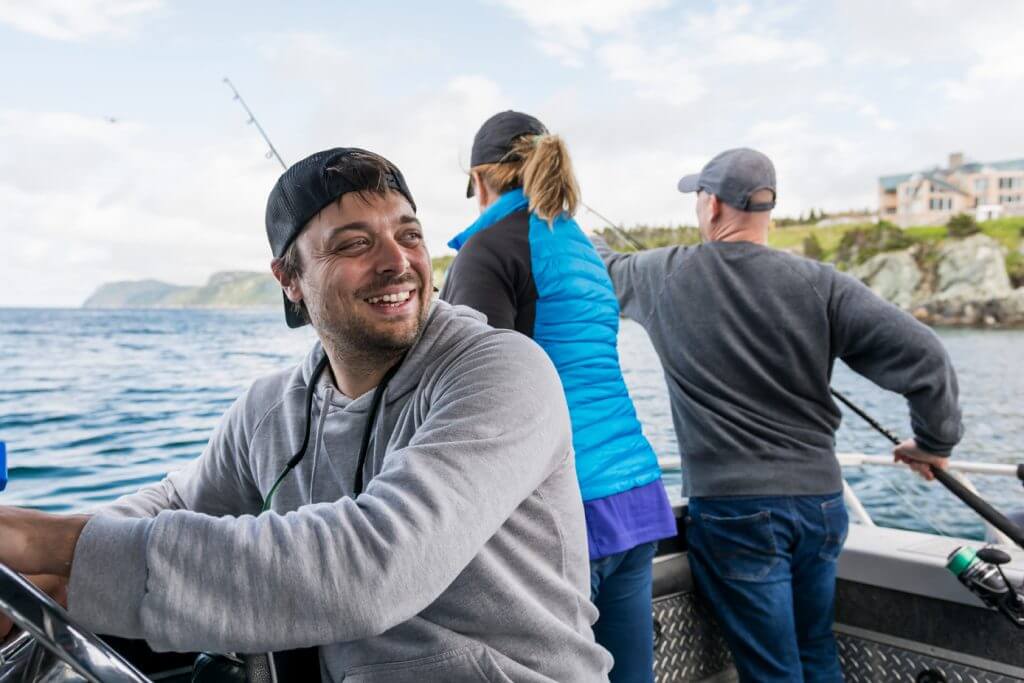 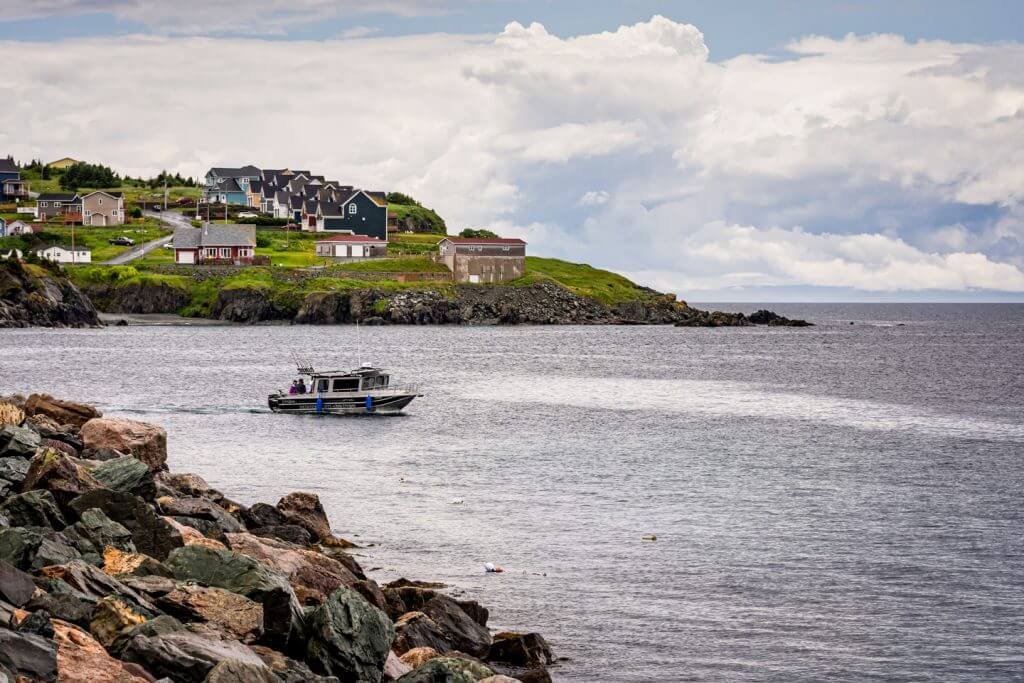 Something you should know is that in Newfoundland & Labrador when we say fish, we always mean cod. For centuries cod has been a vital part of the island’s economy and the seasonal fishery shaped its culture.

As Captain Nick would tell you, the love of fishing usually begins at an early age. “Some of my favourite memories of fishing are being out in the dory with my grandfather. He used to make dories in his shed, so it was always amazing to me when we used to be able to go out in the ocean in them after the fact. I’ll always remember going trouting with bamboo rods with him while mom picked bakeapples (also known as cloud berries) in the bog near the pond.”

These cherished moments where tradition and family join together is how the art of fishing has been passed down from generations. 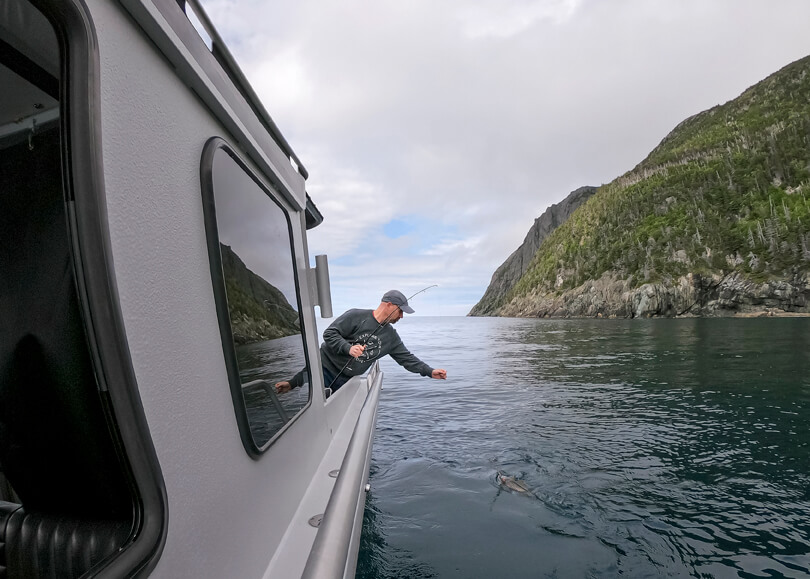 Fishing for cod is a unique experience, you simply plunk your line in the water, reel in the line about two to three times and then gently tug up (also known as jigging). If you are lucky, just as quick as you begin to tug you feel the weight of a fish hooking onto the lure. Here’s where the fun begins. Now you have to bring that fish to the surface. To do so Captain Nick will show you the path of least resistance, which inadvertently is a bit of a workout. As the saying goes “the fruit of your hard work is the sweetest.”

Though Saltwater Society is searching for cod sometimes they find their predators as well.  Captain Nick remembers their largest “catch”, a Porbeagle Shark, last year, that was almost 400 lbs. Of course, it was returned to the depths from which it came. 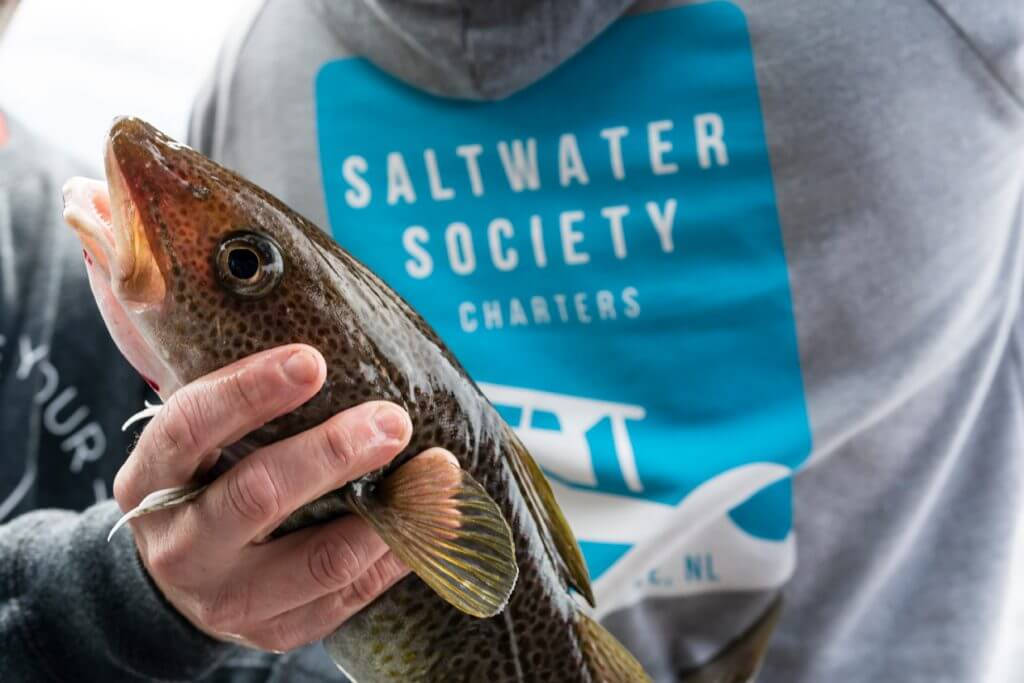 A Beach or a Cove? Or Both.

After two hours on the bay, salt sprayed and hopefully giddy from your plentiful catch, you will swoop past Bell Island and return to the harbour. Once on shore, your hosts will caravan you to a nearby cove and guide you down a narrow rocky path to a local beach. Hidden from the road, it is a secret gem only known to people in the community and features a cascading waterfall and rolling stream at its mouth.

Upon your arrival you will be met by the executive chef, Nick Jewcyzk, who will greet you and show you to the beautifully set table lined with scallop shells, oil lanterns and Nan’s dishes. The start of your feast will be waiting for you. 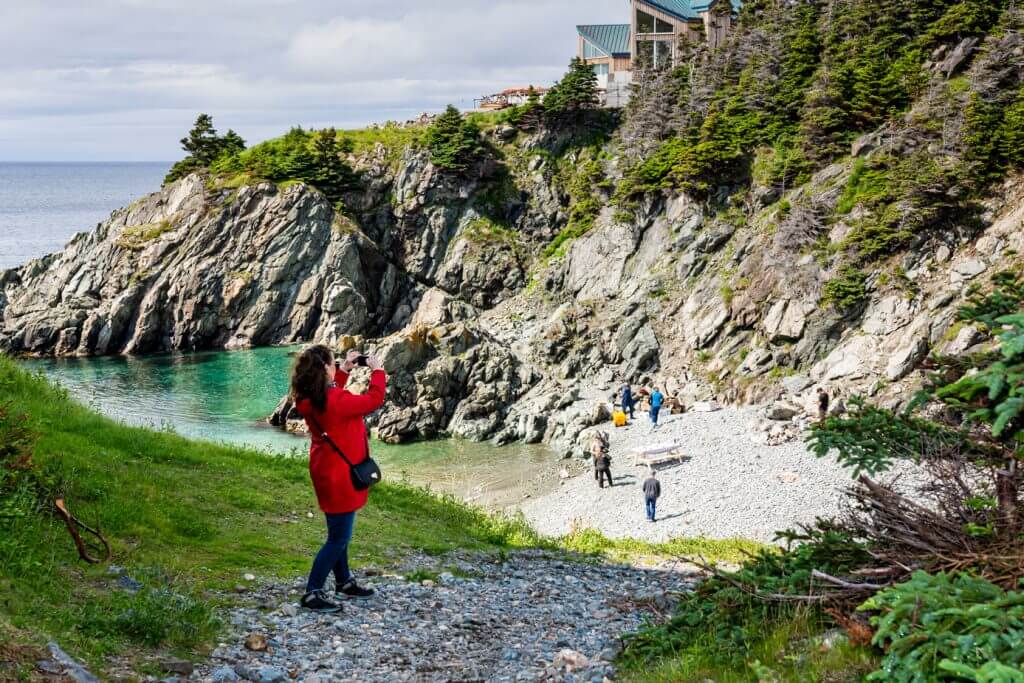 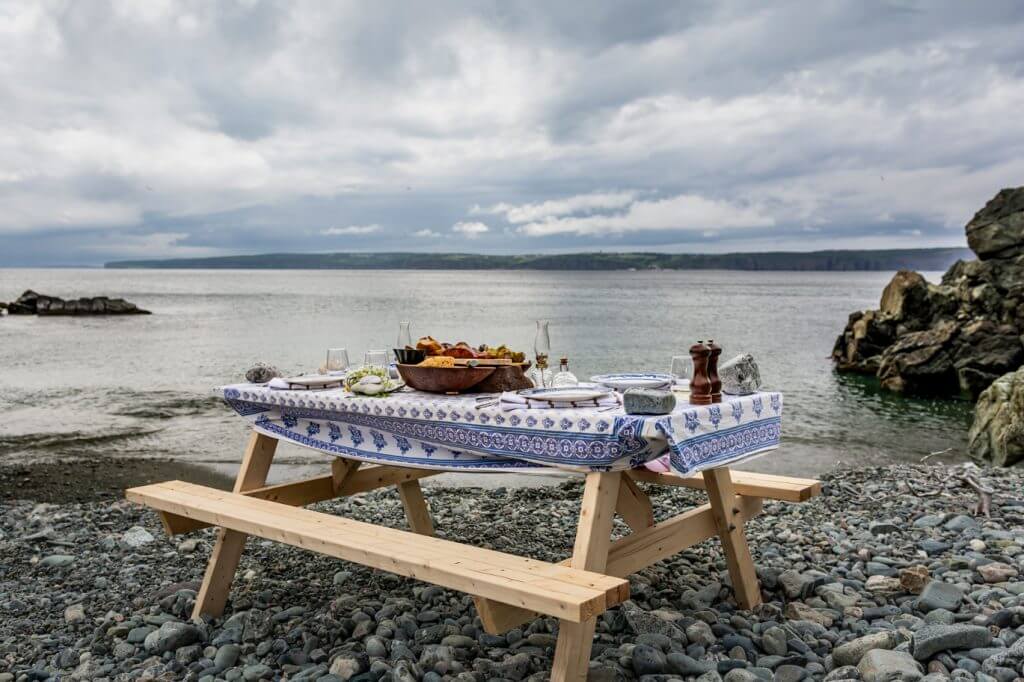 While the chef begins to prepare the main course of the seafood feast, you and your group will snack on a colourful charcuterie board that features riches from the sea and land. A hearty filet of house smoked salmon flanks the light and fluffy fish cakes and creamy sharp cheese, which is also a local feature. The colourful garden additions are a Newfoundland table staple, preserved mustard pickles and bright beets liven up the plate. Bite into each on their own or scoop it all together with a freshly baked sweet roll. This is a little slice of heaven. 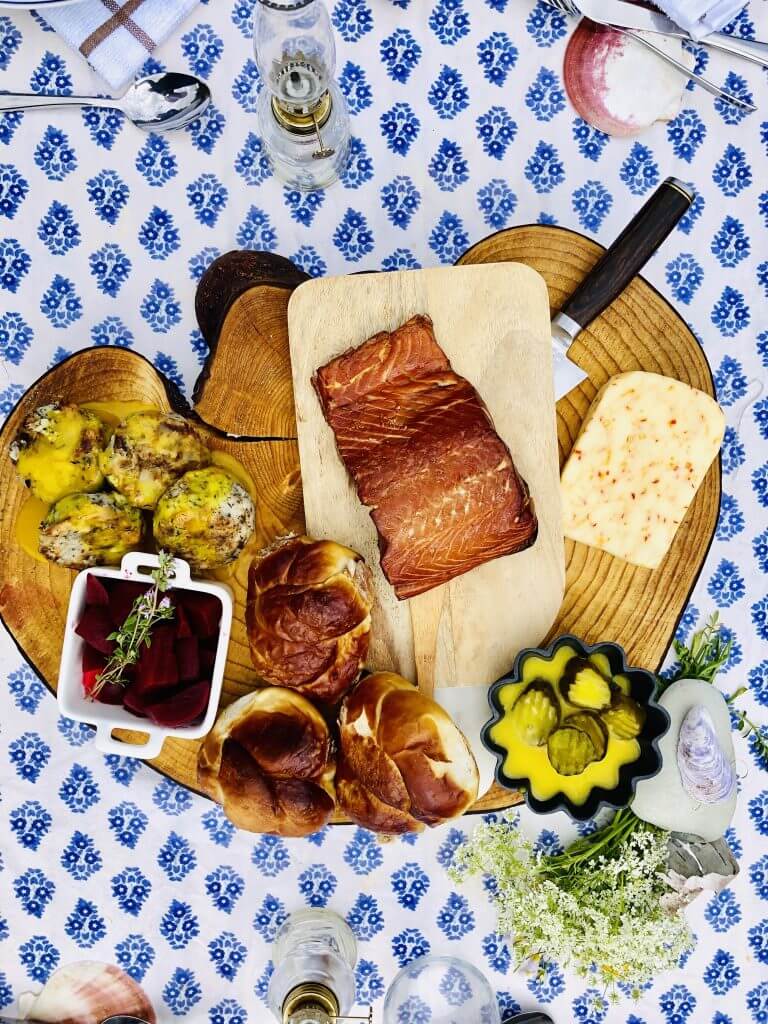 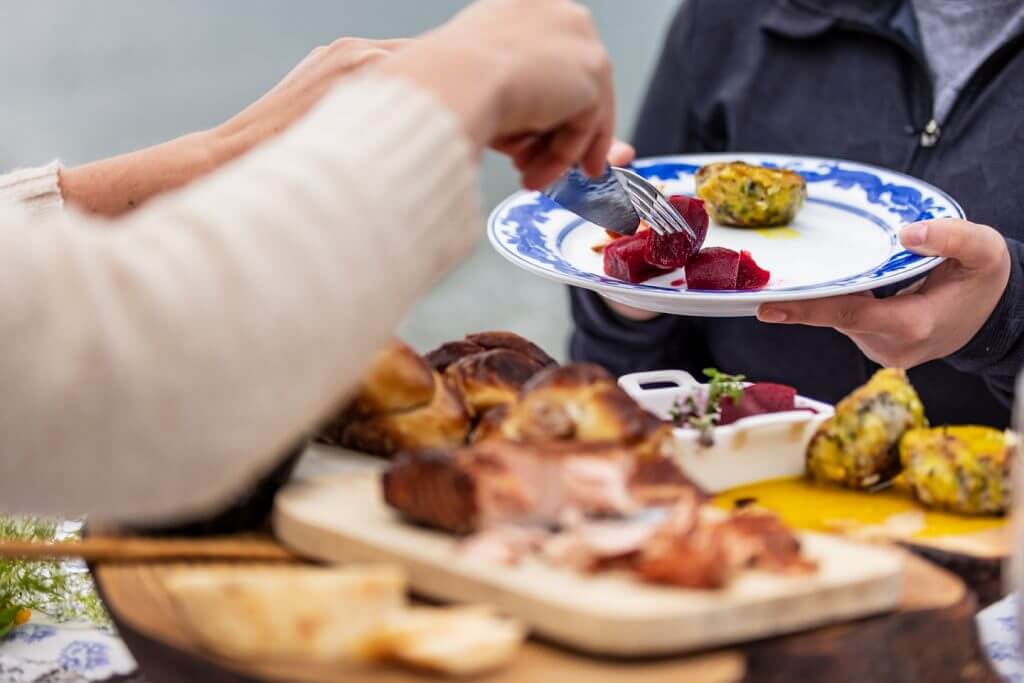 Your background music throughout the meal is a symphony of waves crashing, whales spouting and a fire crackling – as a pot of steamed mussels, crab and lobster stew together with raspberry pale ale. The refreshing addition of beer brightens the sumptuous meat with its light and fruity citrus finish and is a Canadian exclusive. Choose to sit around the fire as the chef basks in the steam or partake in a few cheers at the table with your friends. The joy of being a part of the Newfoundland cookout culture never skips a beat. 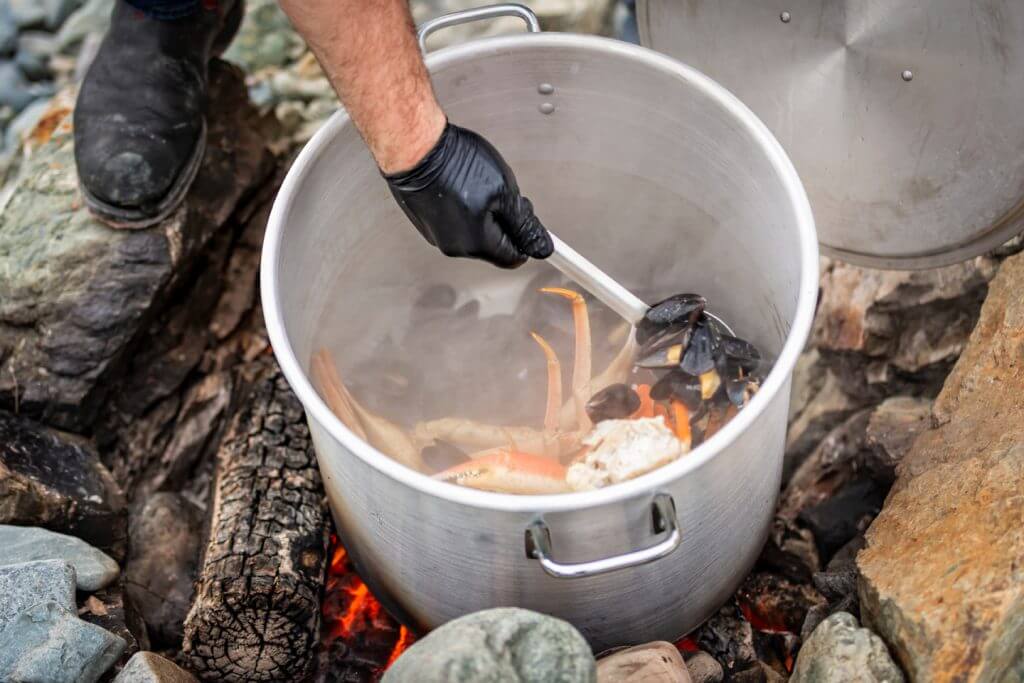 A meal wouldn’t be complete without a little bubbly. Your host will retrieve a bottle of sparkling beverage that has been cleverly chilled by the nearby stream. The refreshing water source originates from the waterfall which sits directly behind you while you dine. With a swift swoop of a hatchet and the celebratory pop, the chef congratulates your crew for a job well done on the water. 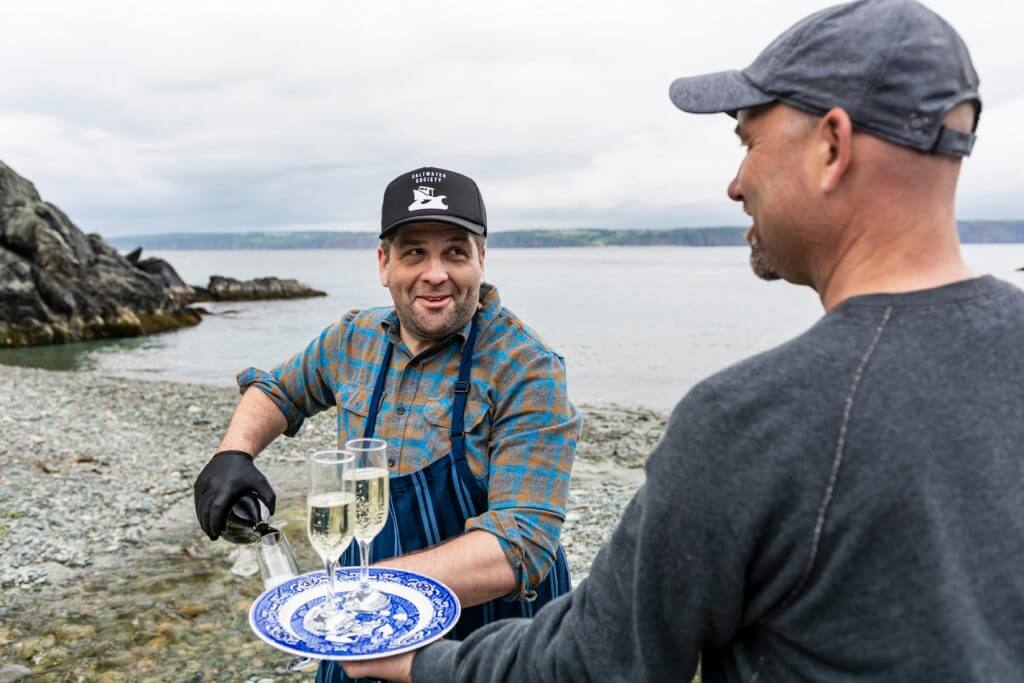 While the mussels, lobster and crab steam in the large stock pot perched on the fire, the Chef will begin preparing the artfully plated main course. Pan seared cod is the crowning jewel to your feast. Nestled on a greek style orzo salad topped with locally harvested pea shoots and greens, the plate is as colourful as it is delicious – helping you see why cod was, and still is considered king of our island. Chef Nick Jewcyzk says “I want people to experience the taste of place. By using our island’s unique bounty of the ocean, we offer the best of what we have.” Gather Around the Fire

Finish the day on a sweet note with a dessert showcasing our colourful hillsides. Freshly foraged wild partridgeberries and blueberries sourced by professional gatherer, Shawn Dawson of the Barking Kettle, are whipped together for a bubbling crumble or a decadent cheesecake  – allowing the bright berries to burst onto your palate. For your last few minutes on the beach gather around the fire and sit on traditional salt-beef buckets while you share a few fishermen tales and take in the best and most nostalgic saltwater views that Newfoundland has to offer. To learn how you can book this tour for yourself, visit saltwatersociety.ca