Cape St. Mary’s Ecological Reserve is an absolute spectacle of the natural world, and a “must-see” place for anyone exploring Newfoundland & Labrador. It is most famous for its large and globally important Northern Gannet colony but is also home to plenty of other birds and wildlife, along with stunning scenery. The reserve protects one of the province’s most rare and special habitats – “hyper-oceanic barrens” – and some of the world’s southernmost subarctic tundra. Few places can claim to combine such breathtaking landscapes with an awe-inspiring show of nature. 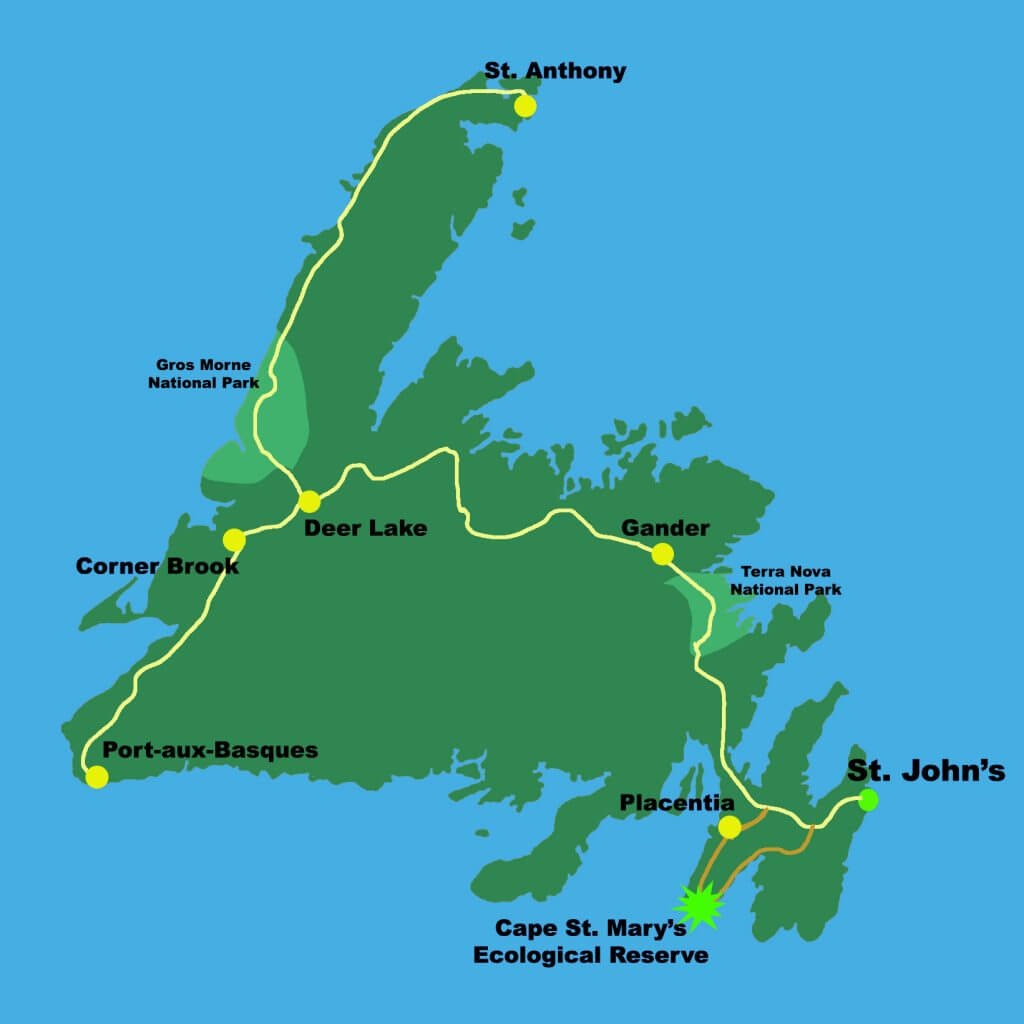 Located at the southwestern tip of the Avalon Peninsula and ~ 2hrs from St. John’s, Cape St. Mary’s is a popular day trip for both visitors and locals – and one of the most popular day tours I lead each summer. Here is how one of those days typically looks:

Our morning drive consists of beautiful terrain – along the lush Salmonier River valley, around the top of St. Mary’s Bay, and through the stunted boreal forests typical of the Avalon Peninsula. We break up the trip with a stop to explore these unique forests and look for a variety of songbirds that call it home. Boreal Chickadees, Fox Sparrow, Blackpoll Warbler & Northern Waterthrush sing from the treetops – and if we’re lucky a family of Canada Jays or locally endangered Red Crossbills might drop in to check us out. Occasionally we even encounter an elusive Northern Goshawk, surveying its vast territory.

Arriving at the reserve 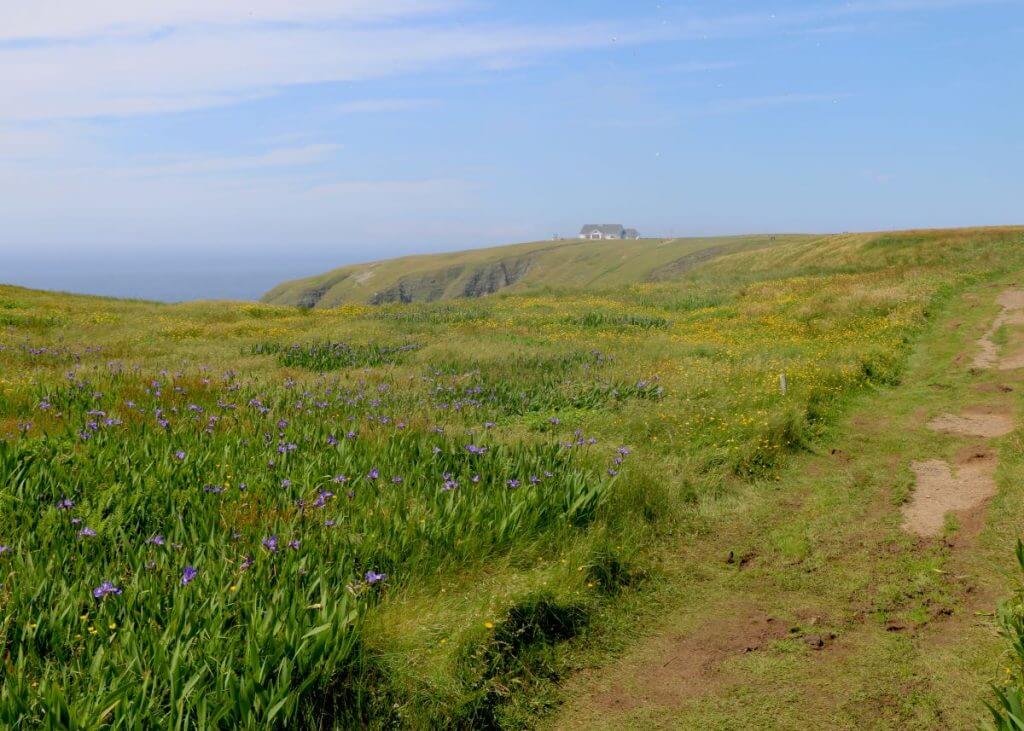 We arrive at Cape St. Mary’s late morning, stopping to check in at the Visitors Centre and chat with the knowledgeable (and always friendly) staff. The centre has an expansive view over the rolling green barrens, staggering cliffs and the bustling seabird colony in the distance. Heading out over the trail, we get up close and personal with it all. The hike itself is 1.3km (just under a mile), and relatively easy as it meanders over gentle hills and a comfortable distance from the clifftops. We stop often to take in the amazing vistas or spot breeding songbirds like Savannah Sparrow, Horned Lark and American Pipit that spend the summer here.

The cacophony of sound grows as we descend the last hill down to “Bird Rock”, where more than 30,000 Northern Gannets are perched atop a giant sea stack and surrounding cliffs. These majestic birds, with their golden heads and six-foot wingspans, soar effortlessly overhead and below us. Some are returning from nearby cliffs with mud and grass to maintain their nests, others from far out at sea with food for their chick. Upon arriving, the birds will rub bills with their partners (a unique behaviour called “fencing”) and preen each other affectionately – rituals that help maintain their lifelong bond. Each pair lays just one egg, stays to care for their young until they fledge in late September or early October, and eventually heads off to spend the winter months in warmer waters off Florida, Texas or even Africa!

Further down the cliffs are several other species of seabird that call Cape St. Mary’s home. Highest up are the Black-legged Kittiwakes (known locally as “tickleace”), a small gull which spends most of its life at sea. Common Murre are gathered on narrow ledges, where they lay a single egg directly on the bare rock and take turns protecting it. The world’s southernmost breeding Thick-billed Murre also live here – they can be harder to spot, but are much sought-after by visiting birders and are rewarding to pick out. Smart-looking Razorbills nest in smaller numbers throughout the colony, while Black Guillemots make their summer homes in crevices at the bottom of the cliffs. Ravens are a regular feature along the clifftops, as are raptors such as Bald Eagle and Northern Harrier which nest nearby. The colony is an incredible sight, and incredibly busy.

Late summer, when many of the seabird species (except gannets) begin to leave the colony, brings an opportunity to see a new suite of birds on their own migrations. Shorebirds such as Whimbrel and American Golden Plover stop by to feast on the reserve’s abundant berries, often staying for several weeks to bulk up before continuing south. Peregrine Falcons and Merlins arrive and can be found hunting along this coast, while a variety of migrating songbirds may pop in for a rest along their own route.

Of course, the reserve is home to far more than “just” birds. Observant visitors may spot a variety of other wildlife – from fox and caribou to seals and whales. Numerous species of butterfly can be found here, such as the range-restricted Short-tailed Swallowtail which is difficult to find outside Newfoundland & Labrador. The unique habitats that make up the reserve also boast a plethora of unique plants and flowers including carnivorous pitcher plants, alpine species, orchids and stunted forests known as “tuckamore”.

A day well spent on the cape

We return to the Visitors Centre to enjoy a much-deserved picnic. Our drive back to St. John’s usually includes a short stop in the quaint outport of Branch – both to look for birds in the estuary and to take in the beautiful scenery. And who knows what else we might spot along the way? 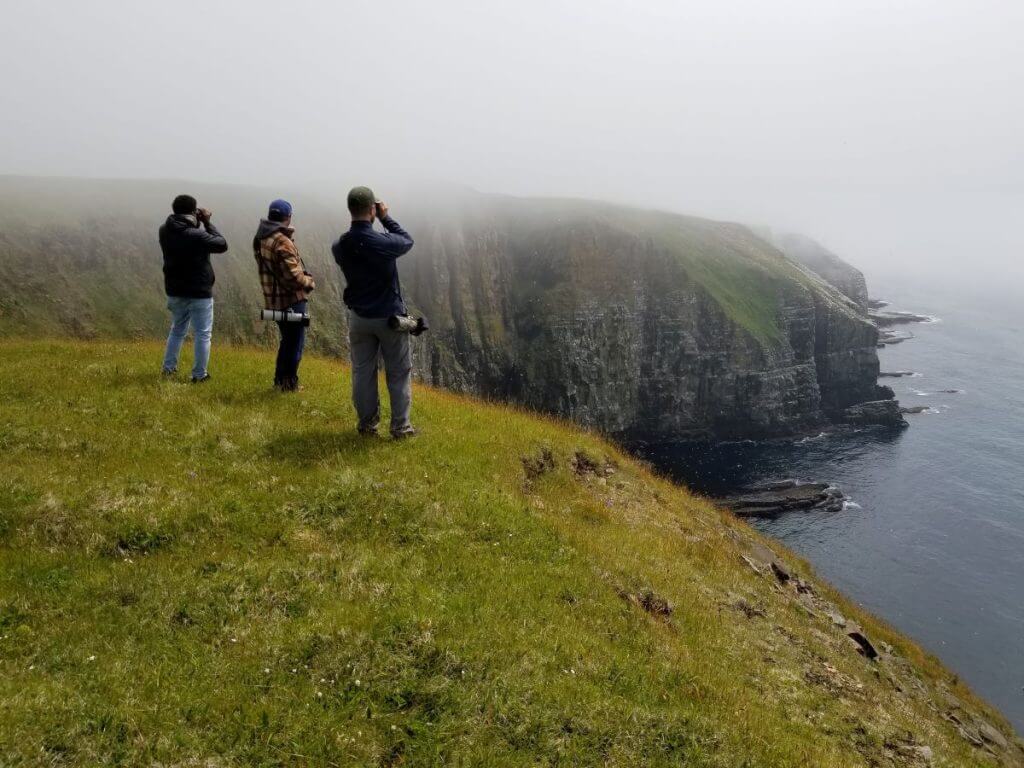 The most difficult part of a day-trip to Cape St. Mary’s Ecological Reserve is having to pull yourself away. 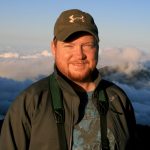